Last week I concluded an interesting series of drone photogrammetry surveys on a development site where there are large quantities of materials to move over the course of the project. This article focuses on time savings from using drones and delving into volumetrics.

My drone related work falls into three main areas, construction updates, photogrammetry surveys and roof surveys and I have been flying now for 6 years. Over that time the number of drone operators has grown significantly and at the same time the construction and property sector has started to use drones as another means of collecting "data". Two important points here being (1) I say started as they are not used to anything like their full potential yet and (2) the critical part is not the "drone" it is the data you collect and what you then do with it.

It is often quoted that drones are very efficient at collecting data, they are cost effective, remove many H&S risks and can deliver results quickly. Speed of delivery of data is a key factor when managing development sites and can make a significant change in how that site is run. We have all got used to getting things done quicker, responding faster and on the flip side wanting that item you ordered delivered the next day or a response to your email within hours. Technology has enabled this. Drones have the ability to collect data much quicker than other methods and therefore you are able to provide information to your clients in a timely fashion. 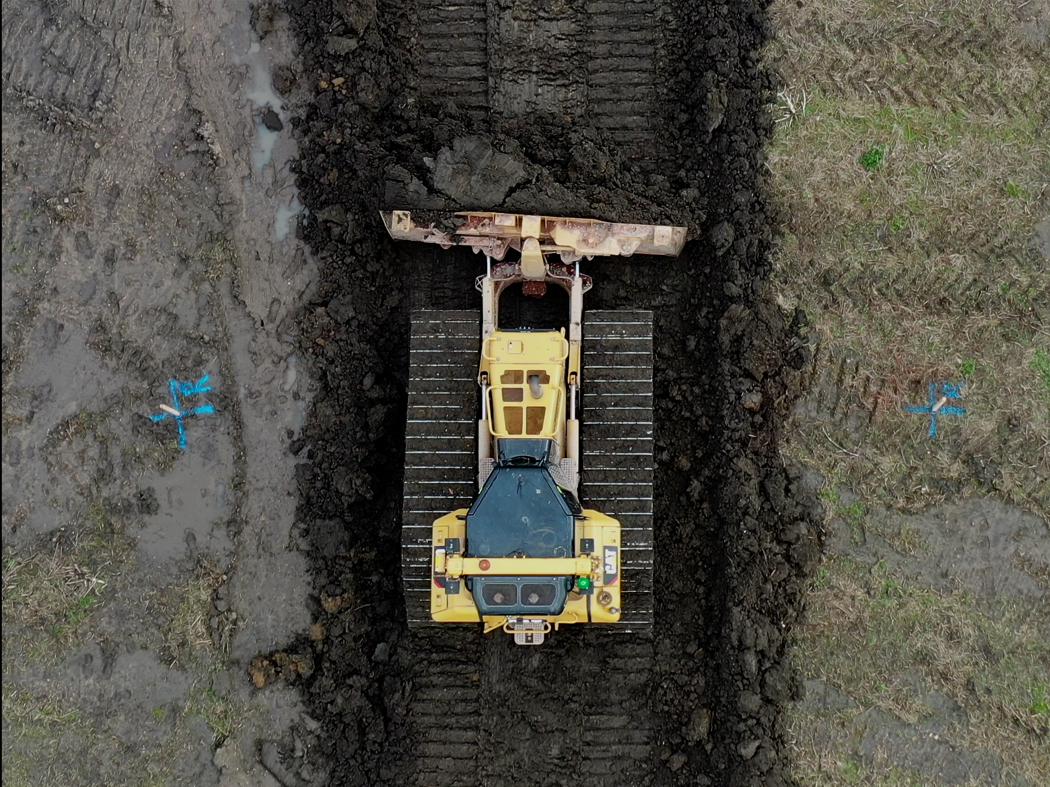 To give you an example of timelines I recently surveyed a development site extending to circa 270 acres which much of the land being "disturbed" as the development progresses. On the site there are large quantities of soils stored in a number of locations with materials being added/removed over time. A traditional topographic survey was going to take an estimated 6 days in the field with two survey teams with another two weeks after that to deliver the final survey. The site was surveyed with a drone in one day and the required data including orthomosaics, point cloud and DEM's delivered to the client within 48 hours. Helped by having a powerful workstation to hand. In another case I was asked last week to check volumes moved part way through muck shifting job. I undertake a lot of work for this particular client and they like the ability to have data quickly so was able to get it surveyed and the volumes estimated all within 24 hours. This is of significant benefit to the client and how they manage the site.

Moving soils and materials around sites is one of those aspects that in the past was probably less well managed than other aspects of construction. It is pretty much the very first thing that happens on any new site when the excavator digs the first bucket full of soil and "put it over there mate, we can deal with it later". The result is on some sites you find "soils" everywhere and inevitably they land up being moved a few times over the life of the development. Every time you move those soils you are incurring costs. In parallel with that you often find that the volumes involved are in some cases a very rough estimate or best guess. Part of the reason is that a traditional topographic survey can take some time compared with a drone. To my thinking it is better for the client to use the most efficient method to collect the data and deliver the information required. In many cases I am exchanging and sharing data with the topographical surveyors.

A recent job highlighted a number of issues relating to volumes. In this case on a large strategic development site there are 4 house builders in addition to the ongoing roll of out building the site infrastructure. A soil heap had to be moved to make way for the development and my client was advised that there was about 12,000m3 to move to another location with the reception site about 600m away. He thought they had underestimated the volume so I undertook an initial survey, the result was an estimated 16,600m3. We also took to opportunity to survey the reception site. This was an existing soils store and these soils would be added to it.

At this stage I should explain that for most surveys I do use ground controls so that all data outputs are to British National Grid. Whilst not essential for a one off survey it is far better in the longer term as you can then compare the results with subsequent surveys.

Once the soils had been moved I then surveyed both sites again. Before starting the muck shift we knew that some further materials had been added to the heap. The volume of material moved from the site was calculated at 17,800m3. The reception site was resurveyed and the estimated volume added to the heap was 18,900m3 representing a 6% increase. This variance often known as "heave" is due to the difference in the compaction of the materials. Soils left in a bund or heap for some time will be more dense that the same materials recently tipped and placed with something like a D6 dozer which invariably have wide low pressure tracks.

Costs of moving materials is ever increasing so for all parties involved being able to understand the volumes is imperative. Just taking fuel alone the above job required a 24 tonne 360 excavator to dig the materials, two A30 dump trucks to move it and a D6 dozer to place it. These four machines consumed about 1,100 litres of diesel a day and it was a 13 day job. In total 14,300l of fuel and at todays prices for red diesel that is £8,000. From April next year when the construction sector have to use white diesel the same fuel will cost £18,000, £1 per cubic metre of material moved. Add to that labour, machinery running costs, depreciation etc etc it is easy to see how soil handing costs add up.

In conclusion when factoring in the costs of moving materials and the ability to have a real handle on the volumes by utilizing drones all those involved with managing a site can have available to them good quality and upto date data. In light of this in some cases the frequency of site surveys has shortened to provide regular updates. Surveying sites every couple of weeks is not uncommon. On the HS2 project I understand they are now undertaking daily drone surveys to monitor soil movements. Now that will require some good workstations and a lot of data storage.

© 2022 EiS Everything is Somewhere Ltd. All Rights Reserved.
Registered in England and Wales - Company Number 8686057