Many clients have old paper maps and plans that hold or depict valuable information. In their hard copy form that are not user friendly and over time will de-grade and suffer from the usual wear and tear. However these plans can be scanned (upto AO in full colour) and imported into the GIS environment and thereafter key location and spatial data can be captured.

Two projects invloved the mapping of various historic mineral interests for private Estate's. Due to changes in Land Registry rules these historic mineral interests have had to be registered. In both cases the Estates had various documents proving title to these minerals togther with various plans originating from the late 19th/early 20th century. These plans were scanned and imported into GIS. They were then georefenced and then the various parcels were captured in a new polygon layer based on Ordnance Survey MasterMap. Georefencing in this particular case was not straight forward as significant parts of the land holding are now developed. In light of this many features no longer existed but with careful interogation of both old and new maps an acceptable fit was found.

Once mapped the polgon data was submitted in electronic format to the Land Registry. This allowed them to directly import the information into the national land registry data set and complete the registration of the mineral interests.

The two plans below show on the left the scanned plan and on the right the captured data based on the MasterMap. 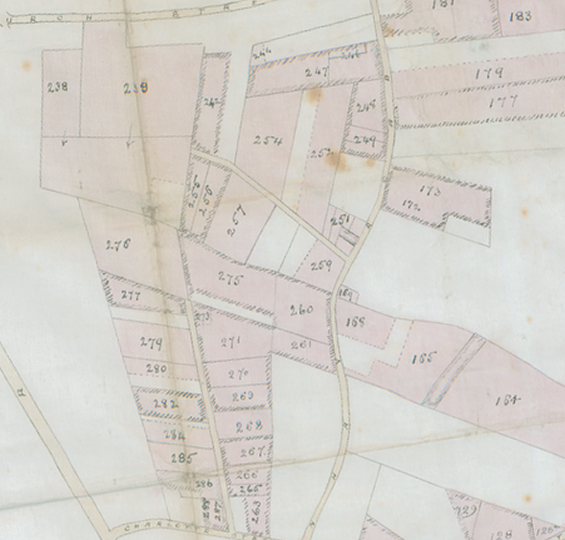